What is Olympic Weightlifting?

You might find a few different names used for Olympic Weightlifting such as weightlifting, Powerlifting or Olympic style weightlifting. It’s a sport that requires the athlete to lift a weighted bar from the floor to above their head.

There are lifts called ‘Clean & Jerk’ & ‘Snatch’. Both lifts require very explosive movements in order to give yourself the best possible chance of achieving a successful lift. It’s a fantastic movement for you to train yourself for maximising both speed and strength.

Both of these exercises have many different variations like hang cleans, raised snatch, deadlifts. Which when performed can hugely increase athletics performance for sports like Athletics, Football, Rugby, Basketball, American Football.

These are only a few sports from a whole host which we have chosen. Because of their biomechanical characteristics, they require the athlete to produce high strength & power. Therefore athletes can benefit from adding in Olympic weightlifting into their training program.

So you want to be better at your chosen sport?

How Olympic Weightlifting can help you…

Because we have an Olympic Weightlifting platform at our Basingstoke Gym. Any athlete wanting to improve their strength & Agility can now capitalise on this.

So many different sports now employee the expert knowledge of a strength & conditioning coach as a part of their coaching set-up, both teams and individual athletes are capitalising on this.

While so many athletes are now incorporating Olympic weightlifting into their training program we obviously know it’s a great tool for developing athletic performance.

The main reasons why Olympic weightlifting is so popular:

2. All muscle groups are used during the lifts.

3. Very Similar biomechanical movements to which the individual would carry out during their chosen sport.

Power Development is a huge aspect of improving your performance for so many sports. Discovering the best ways to improve athletics power is very important.

It’s been said there are 7 main components which influence an athlete’s ability to generate power. They are:

Have a look at the image below, most of the time Olympic Weightlifting will place in the strength / Speed side of the Force-Velocity Curve. From this will improve the strength / speed attributes listed above. In simple terms, it requires the athlete to move heavy weights as fast as possible which helps produce high levels of explosive strength. 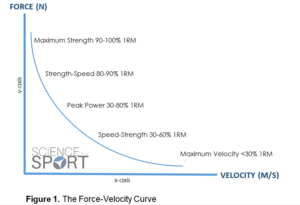 A few of the positions you see all of your sporting heroes achieve are very similar to the positions you’ll see during the Clean & Jerk and Snatch lifts. The positions are the ‘athletic position’ and ‘triple extension’ which you can see in many sports.

Therefore, improving an individual’s ability to be explosive and fast from these positions, is a clear reason why adding Olympic weightlifting to an athlete’s program is a great addition.

Not only are the Olympic weightlifting exercises fantastic at increasing athletes Power & agility for improving performance. Also, Olympic Weightlifting can be used for testing & monitoring performance of their training programme.

As a result, by performing 1 rep Maximum effort for all the different type of lifts, at points throughout the year. It gives the coach and the athlete a great platform to see where the athlete is køb af viagra til kvinder. Either at the start of a programme or as a monitoring aspect for an athlete that’s already some way into their programme.